March 6, 2011 · by Cheltenham Against Cuts · in Uncategorized · Leave a comment

The geniuses at Gloucester City Council have better things to spend Council Tax Payers` money on than pesky public services. Instead, they`ve recently spent some money on advertising the slightly cheaper parking in Gloucester to people in er,…. Cheltenham! As this photo (date 4/3/11) 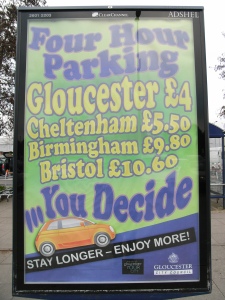 of an advert seen in the car park of Cheltenham Sainsbury`s shows, the price of parking for 4 hours in Gloucester is £4, whereas in Cheltenham it would cost you £5.50. So, without mentioning any other attractions in Gloucester, or indeed the new-fangled concept of Park-and-Ride, the marketing morons at the City Council think that people in Cheltenham will spend the extra money it takes to get to Gloucester and back to save £1.50 in parking charges.

Update – it`s much worse than we thought
24 hours after this blog post appeared thisisgloucestershire and the Citizen revealed that this advert, which it described as “cheeky”, had appeared in the Echo (a full page advert) , the Citizen, and in newspapers in Bristol and Birmingham. Inspite of the attempt to attract people from 40 miles away, Paul James, leader of Gloucester City Council said “We also want to help showcase Gloucester as a shopping destination and help support businesses and the economy,” adding, “After all, shopping local saves money on fuel and helps the environment.”!
Money is very tight we`re endlessly told by those determined to slash our public services, yet those same people will spend significant amounts of money (I`d love to know exactly how much) on a marketing campaign which benefits the advertising revenue of the Echo, Citizen (part of the Daily Mail group) and newspapers in Birmingham & Bristol (quite possibly also part of the Daily Mail group). No wonder the thisisgloucestershire story didn`t mention the criminal waste of money this incompetent, environmentally unsound marketing campaign demonstrates – it`s a nice little earner for the large corporation that owns the website!